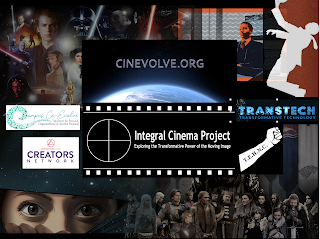 Welcome to 2020! 2019 has been a major transition year for the Integral Cinema Project. We shifted our energy and focus toward meeting the challenges humanity is facing as part of the current global-scale evolutionary crisis (which is the root cause of all our current global-scale challenges like climate change, mass species extinctions, wealth inequality, rising ethno-nationalism and more). Our research on the co-evolution of the moving image, consciousness, technology, culture and society indicates all these crises are the products of the growing gap between the evolution of our technologies and the evolution of our collective consciousness. We seem to lack the collective capacity to use these advanced technologies for healthy, life-sustaining and life-flourishing purposes.

This year the Integral Cinema Project embarked on a number of exciting new ventures...

This year the Integral Cinema Project embarked on a number of exciting new ventures. We have been called to codify what we’ve learned and put it into practice so we can begin to train media makers to understand Integral thinking and incorporate it into their own work. The time for research and theory-building expands to include a new initiative to put our findings out into the world! To this end, we have joined forces with other evolutionary-oriented institutions and organizations including Conscious Good Networks and Campus Co-Evolve, and created The Cinevolve Initiative, a Manhattan Project-style research and enactment initiative to uplift humanity through these challenging times by storifying and gamifying the stages of human development and the evolution of individual and collective consciousness. Operating under the auspices of the Integral Cinema Project, Cinevolve aims to create “proof of concept” content and train others to do so as well.

This year we joined with the Conscious Good Creators Network to bring integral cinema theory and practice to this collective of transformative media makers from around the world through our Conscious Movie-of-the-Month (CMoM) integral movie review and discussion series. The following are the 2019 CMoM virtual discussions:

This year also saw the beginning of our initiative to train as many media-makers in integral cinematic consciousness as possible to help assist humanity in navigating through our current evolutionary crisis/transition.

The following are all the 2019 movies and TV series that tested positive for having integral elements and have been added to our IMDb Integral Movie and TV List.

The following is a list of all our publications published in 2019:

The following are this years integral cinema video podcast sessions between Integral Cinema Project founder Mark Allan Kaplan, Ph.D. and our Director of Communications and the host of the TEHNC Podcast series, Jonathan Steigman.

In addition to the above projects we have been doing this last year with our partners, we are working with them in various other ways as well.