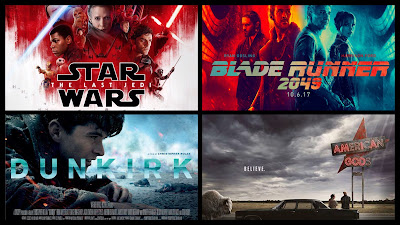 2017 has been a challenging year for many of us and sometimes taking a break from all the challenges in these times is needed; sometimes we need an escape or release from the stresses and sometimes we need some distance on our lives and the world to see things from a different perspective. Great integral movies and television or streaming series can often do both at the same time. In addition, integral cinematic works can exercise our perspective-taking capacities, something that can only help us in dealing with these challenging times...plus we get to have popcorn while we are doing our integral cinematic workout...

So here are this years additions to the IMDb Integral Movie and TV List of cinematic works that tested positive for elements of the Integral structure of consciousness by the Integral Cinema Project. Some of these are new works released in 2017 and some are older works that have been rediscovered as integral gems from the past. For the complete list of Integral movies and series check out the full list at: http://www.imdb.com/list/ls074613980/


Star Wars VIII - The Last Jedi (2017; Now in Theaters) - The evolutionary arc of the Skywalker dynasty continues with a second major tetra-evolutionary cycle (inner and outer selves, cultures and systemic forces) following the Skywalker lineage and their world through their evolutionary arcs. This latest installment of the saga has some major twists in the evolutionary arcs of both the characters and the greater and deeper archetypal patterns, including the challenging of the duality between the dark and Light Forces toward a more mature and complex understanding of the ultimate non-dual nature of the Force. We also witness the healing of Luke's major regression and primal wounding from his past and his conscious transition into the Kosmocentric Witness.

Dunkirk (2017; Now On Demand and Disk) - "Dunkirk" is a masterful representation of the integral mind at work. According to integral philosopher Jean Gebser, the main impulse of the Integral structure of consciousness is to concretize all dimensions of being and becoming and attempt to integrate them into a meaningful whole. With this film, filmmaker Christopher Nolan has given us an experientially powerful "integration" of the multiple strands of existence within a specific historical event that includes the subjective, objective, relational and systemic aspects of the event and the varying temporal realities that unfold in relation to different perspectives on the event from these multiple dimensions of being and becoming. Through this process Nolan gives us a simultaneously simple and complex emotional, visceral and existential experience that concretizes and integrates the event into a whole that is way beyond the sum of its parts.

Blade Runner 2049 (2017; Soon On Demand and Disk) - A haunting and beautiful sequel to a cult classic that deepens and expands the Blade Runner universe to include elegant and complex evolutionary arcs for the main character, his cyber-lover and their relationship that transcends the boundaries of human death, digital eradication and the notion of what constitutes sentient existence.

American Gods (2017; Starz Network) - This Starz cable series personifies various stages of evolutionary development in the form of the Gods we create and project at those stages, exploring the possibility that consciousness precedes our reality and that we create our world and even our Gods. This well crafted exploration has the potential to give the viewer a potential experience of stepping back and witnessing the different stages of development in ourselves and our world.

Rogue One (2016; On Demand and Disk) - "Rogue One: A Star Wars Story" is a wonderful addition to the Star Wars universe, deepening and expanding it's integrally-informed evolutionary arc while also portraying a unique evolutionary arc for its main character, Jyn, who's developmental arc is repressed until re-connecting with her father through a hologram that triggers the release of the repressed forces within her and propels her forward till she faces her mortality with a glimmer of Kosmo-centric awareness.

Westworld (2016--; HBO Network) - HBO's brilliant and multi-layered remake of the Michael Creighton 1973 sci-fi movie about an adult AI amusement park gone astray. In this new cinematic journey, the nature of consciousness and its evolution is viscerally explored as the human's are forced to deal with their loosing touch with their own humanity while the AI's are on the cusp of their own great evolutionary awakening.

The Lego Movie (2014; On Demand and Disk) - A fun and surprisingly deep animated film based on the Lego universe that follows it's main Lego character's evolution from archaic unconsciousness to Kosmo-centric awareness and action as he transcends the boundaries between the Lego world and the human world.

Game of Thrones (2011--; HBO Network) - Epic groundbreaking series integrating the reimagining of deep mythic and magical archetypes, the tracing of the emergence of rational and pluralistic cultural constructs, and the mapping of evolutionary story arcs with glimpses of a bigger picture from a Kosmo-centric perspectival field. This masterfully executed synthesis creates a vast yet intimate multi-layered visceral experience of the human quest for power, for meaning and for goodness.

Black Mirror (2011--; Netflix) - "Black Mirror" is a brilliant and haunting series in the "Twilight Zone" tradition that puts the audience in the Kosmo-centric witness seat to bear witness to the evolutionary gap between the evolution of technology and the evolution of individual and collective human consciousness. Some episodes, like "San Junipero" give us a full evolutionary arc while others take us to various evolutionary inflection points in a projected not-to-distant future.

Diva (1981; On Demand) - "Diva" is a French cult film classic from the early 80s that integrates European and American cinema conventions into a hip uniquely styled hybrid Comedy-Thriller-Romance-Mystical tale. As we go along for the ride of this zeitgeist capturing film, the camera moves the audience from the deeply personal and emotional to the intellectual and philosophical to the big-picture, overview, and kosmo-centric witness position. The young male lead character evolves from ego-centric to ethnocentric to socio-centric circles of care and concern while he navigates through a maze of life threatening and existential "challenges," helped by an older street-wise cosmopolitan kosmo-centric holy man.

The Twilight Zone (1959-1964; On Demand and Disk) - This classic anthology television series explores the further reaches of our inner and outer world within a Kosmic-witnessing frame for the viewer. We are put in the observer seat at the beginning of every episode through the shows opening that includes both visuals and text spoken by the host and show creator, Rod Serling. And as we observe, the stories, visuals and soundscapes they shift us into and out of the observer, witness position and into deeply subjective experiences and expansive existential and philosophical reflections. When you combine the witnessing framing and the expansive reflections you get a taste of the Kosmo-centric Witness perspectival field; in many episodes we, the viewer, can have the sense that we are glimpsing a big picture so big it is beyond our comprehension, that there is a meaningful pattern to it all, to all the dimensions we are observing and the multiple layers of hidden dimensions just beyond our reach, and that there is a much greater intelligence at work.
Posted by markallankaplan at 12/29/2017 04:30:00 PM 1 comment: 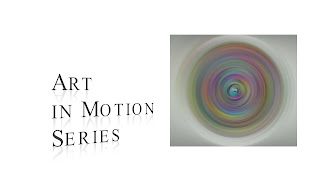 The Integral Cinema Project announces the ART-IN-MOTION SERIES, a collection of moving image meditations that attempt to use advanced audiovisual and cinematic entrainment technologies along with animated abstract art to explore the human perceptual field. The intention behind these works is to potentially induce shifts in our awareness of our own perceptual field and bring the normally unconscious perceptual construct-forming system of the human mind to conscious awareness.

ICP cinematic artist and researcher Mark Allan Kaplan attempts to morph one of his artworks into a transformative cinematic meditation using an adapted form of the "Cine-Sculpture" approach developed by ICP research associate James Lusero and combines it with Integral Cinematic Metadesign techniques to synchronize visual, auditory, textual and temporal expressive forms with an underlying transformative perceptual and conceptual field.

You can view the whole series at the Integral Cinema Project's YouTube Channel at: https://www.youtube.com/playlist?list=PLQg0cPXteHDOnD9ehSBTxHXFZ5vL93_pE
Posted by markallankaplan at 12/28/2017 12:50:00 AM No comments: