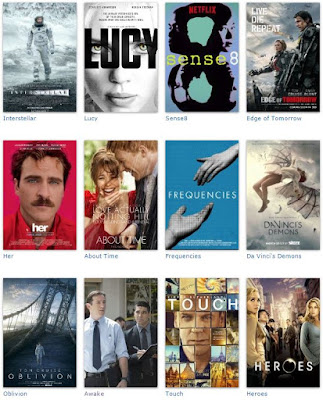 The Integral Movie and TV List has been updated and moved over to the Internet Movie Database (IMDb) at: http://www.imdb.com/list/ls074613980/.

On the list you will find all the currently tested movies and television series that have integrally-informed elements to varying degrees according to testing criteria developed during research on the application of Integral Theory to cinematic media theory and practice.

Recent updates to the list include the following titles:


About Time (2013) - An integrally-informed Kosmic love story about a time-traveler who attempts to use time to fix mistakes and problems in his everyday life, love life, and in the lives of those around him and ends up evolving himself and others in ways beyond measure.

Edge of Tomorrow (2014) - A viscerally-charged temporality-loop-based evolutionary science fiction journey about a soldier stuck on repeat going through the same battle over and over, forcing him to develop as a warrior and evolve from an egocentric to Kosmo-centric human being and ultimately find a Kosmic love.

Frequencies (2013) - Strange, wondrous and intimate integral-evolutionary parallel-present-reality science fiction film exploring free will, fate, attraction, and the Kosmic power of the frequencies of being and becoming.

Her (2013) - A beautiful, subtle, and imaginative integrally-informed exploration of the co-evolution of humanity and technology and the evolution of artificial intelligence toward a Kosmo-centric reality.

Interstellar (2014) - The beautiful and groundbreaking integrally-informed science fiction space epic that attempts to both accurately capture the real physics of outer space and concretize the non-physical dimension of love as a Kosmic level force of existence.

Man Facing Southeast (1986) - A mysterious, magical, Christ-like, integral-esque and perhaps "alien" patient in an insane asylum acts as the evolutionary catalyst for the residing psychologist and all the other lives he touches.

Oblivion (2013) - A haunting and layered science fiction exploration of the evolution of awareness and consciousness within and beyond the traditional corporal forms of humanity.


Awake (2012 TV Series) - An imaginative short-lived TV series that attempts to use temporal and spatial shifts in reality in the service of the main characters evolution toward a Kosmo-centric level of being.

Battlestar Galactica (2004 TV Series) - Epic integral-evolutionary space saga that takes us on a developmental journey that slowly becomes deeper, richer and more complex and ultimately evolves into a profoundly transformative time, space and mind-bending adventure where villains evolve into heroes, pasts become the future and the future become past.

Da Vinci's Demons (2013 TV Series) - A fun, imaginative, and deep reimagining of the life and times of Leonardo Da Vinci portraying him as an integrally-informed genius way ahead of his time.

Sense8 (2015 TV Series) - "Sense8" is a beautiful, brilliant, and groundbreaking integrally-informed dramatic series that attempts to capture and help us vicariously and viscerally experience the tetra-enmeshment of all four dimension-perspectives of our individual and collective interior and exterior world, as its characters and we the viewer experience the dissolving of the boundaries between individual subjective reality, collective relational reality, individual objective reality, and collective environmental reality.

Touch (2012 TV Series) - A beautiful short-lived TV series about the interconnectedness of all things and an integrally-informed level gifted child who perceives and acts from this complex web of connection and profoundly effects those around him and the fabric of reality itself.


More movies and TV series are added to the list as more are tested so check back periodically to keep abreast of the research.