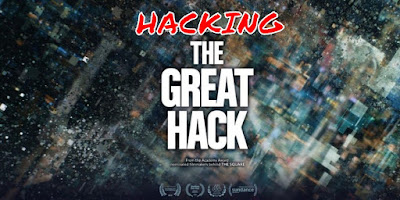 Please join us this Monday September 30th at 6:30pm PST for a live FREE virtual discussion of The Great Hack (2019), the recently released Netflix documentary on the Cambridge Analytica election hacking scandal and the role of Facebook in facilitating the mass data gathering that may have contributed to the passage of Brexit and the election of Donald Trump.

Together we will explore how this documentary explores the relationship between our consciousness and our evolving media technologies. The Great Hack sounds an alarm that should be heard by all us conscious media makers and consumers. A war is being waged for control of our individual and collective consciousness, with our media, especially social media, being weaponized against us and used to tear our society apart.

We will also be exploring the nature of the new propaganda war on our consciousness and what we can do about it as conscious media consumers and media makers. This important conversation in our community will continue beyond this month’s exploration as we roll out courses to help train ourselves to answer the calling of this moment by using media to raise consciousness. Together, we can help win the battle for the hearts and minds of humanity.

If you have not already joined our free Conscious Movie-of-the-Month Group/Club, you can still join us anytime by signing up for a free membership at the Conscious Good Creators Network at: https://conscious-good.mn.co/share/wPseacTS1JFJmxu8?utm_source=manual

To find out more about this free event and register to attend visit: https://conscious-good.mn.co/events/hacking-the-great-hack-a-conscious-movie-of-the-month-virtual-discussion

The Big Picture of the NOW 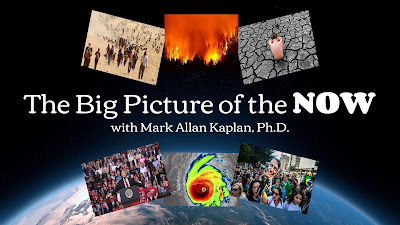 Here, by popular request, is Mark Allan Kaplan, media psychologist and founder and Executive Director of the Integral Cinema Project, explaining why "All problems are problems of consciousness" as he unpacks the current global situation: how we got here, why it's unprecedented in world history, and why media in all its evolving forms may be the best and most powerful tool to awaken us into a new paradigm of being.


If you want to take a deeper dive, Mark will be teaching "Transformative Media Creation and Reception" for Campus-Coevolve.org starting in early October, 2019. (I am a Contributing Faculty Member.) To find out more, please visit: https://campus-coevolve.org/course/transformative-media/


We are extending our exploration of "The Great Hack" into this month while we await news about a potential live discussion with the filmmakers. In the meantime we thought we would explore the ethics of media, with particular questions around the issues brought up in this movie and the ethics of conscious media in general, starting with the question: Where is the line for conscious attempts to use media to change people’s minds?

Some people believe that even if you are trying to have a positive impact on your audience, any deliberate attempt to manipulate people’s consciousness is an unethical invasion of privacy.

On the other hand, most artists working in most arts specifically intend to have an impact on their audience.

Many of us in conscious media are attempting to raise peoples consciousness itself, or to raise awareness around certain issues or ideas.

Some of us, myself included, feel called to use the power of media as a force for good, to counter those who are using media in such unscrupulous ways as trying to convince people not to vote, to fan the flames of hatred and division, to deliberately misinform for political ends, or to suppress knowledge or action on global-scale dangers for the sake of short-term financial interests.

The big data driven propaganda machines The Great Hack spotlights are a clear and present danger to democracy itself, and emerging media technologies like “deepfake” videos can accurately create a false visual record of any person saying or doing things they never said or did. We are indeed entering a new frontier.

A war is already being waged for control of our consciousness and behavior, as evidenced in this movie, and the technologies being weaponized against us are evolving rapidly.

How do we combat this...without crossing the line ourselves? The Great Hack eloquently explores the awakening of whistleblower Brittany Kaiser's awareness of having crossed her own ethical boundaries without realizing it. It raises the question: How do we keep awake, aware and ethically grounded in a world of so many blurred lines?

If you have not already joined our free Conscious Movie-of-the-Month Group/Club, you can still join us anytime by signing up for a free membership at the Conscious Good Creators Network at: https://conscious-good.mn.co/share/wPseacTS1JFJmxu8?utm_source=manual