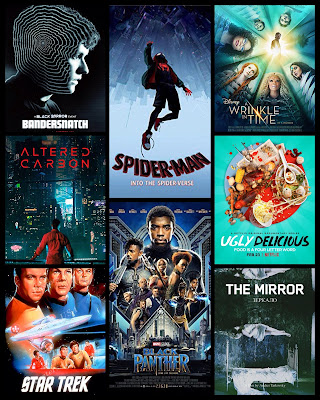 2018 was another challenging year for many of us and sometimes taking a break from all the challenges in these times is needed; sometimes we need an escape or release from the stresses and sometimes we need some distance on our lives and the world to see things from a different perspective. Great integral movies and television or streaming series can often do both at the same time. In addition, integral cinematic works can exercise our perspective-taking capacities, something that can only help us in dealing with these challenging times...plus we get to have popcorn while we are doing our integral cinematic workout...

So here are this last year's additions to the IMDb Integral Movie and TV List of cinematic works that tested positive for elements of the Integral structure of consciousness by the Integral Cinema Project. Some of these are new works released in 2018 and some are older works that have been rediscovered as integral gems from the past. For the complete list of Integral movies and series check out the full list at: http://www.imdb.com/list/ls074613980/

Spider-man: Into the Spider-verse (2018; Currently in Theaters) - This animated addition to the Spider-man movie series is an Integral game-changer, a truly extraordinary film that transcends and includes the evolution of comics, anime and superhero films, and so many other domains, worlds, dimensions, perspectives and realities and integrates them into a wondrous, fun, classic yet avant-garde, holistic, holonic, gestalt...integral masterpiece.

Black Panther (2018; Now On Demand and Disk) - Black Panther is a brilliant integral cinematic work that mirrors multiple stages of development in all aspects and levels of its narrative, visual, auditory and editorial expressions. It also shows both healthy and pathological manifestations of each stage and represents subtle ways that one can transcend the pathologies and evolve to higher stages of development. At the same time, this film tackles major psychological, cultural and social issues from primal psychological wounding to complex issues of race, class, oppression and isolationism in subtle and deep ways. And all of this is elegantly hidden beneath the surface of a wonderful and traditional superhero genre piece. Watch our Black Panther TEHNC Podcast series on this important integral work.

Wrinkle in Time (2018; Now On Demand and Disk) - Wrinkle in Time is a beautiful, rich and groundbreaking integrally-informed cinematic work that uses an advanced form of feminine-communion storytelling in its use of communion-centered editorial, camerawork and production design and its nonlinear spiraling evolutionary arc of both its characters and its story. In this multilayered work the shots and cuts are focused less on the action and more on deep and layered emotions, inner promptings and catharses, as the characters and story streams move the characters and us the viewer through various stages of development that evolve through a series of cycles back in and through each stage several times, peeling away different forms and levels of challenges in those stages that ultimately lead to deep yet subtle evolutionary growth. Regrettably this great work falters at the end with a small yet fatal flaw in the story and character lines of development at a peak transition moment. Still a great work worth seeing.

Black Mirror: Bandersnatch (2018; Netflix) - This feature length episode of the groundbreaking integral series from Netflix breaks even more new ground by integrating the interactivity between multiple storyworld streams and the viewer/player experience as we are given choices in how the story unfolds in real time. The integration of story, character and viewer experience even includes the main character starting to act like they can feel us the viewer manipulating their life. The multi-layered complex interconnections between the on-screen storyworld and the viewer/player reality produces a potentially profound experience of deep integral aperspectival awareness in us as we watch and play along. This integration leads us and the main character into intellectually, emotionally and existentially questioning essential aspects of free will, choice and the nature of reality, and potentially shifting us into the integral-Kosmocentric witness state in search of the "big picture" of existence.

Altered Carbon (2018; Netflix) - This Netflix original series explores the question of what part does death play in the evolution of consciousness, culture and society by transporting us to a sci-fi world where death has been eliminated by using technology to digitize consciousness and transfer to other bodies (sleeves). In the first season we see how the absence of death messes with the spiral of development in ways that causes us to potentially loose our humanity while increasing class divides and losing the gravity that draws us toward healthy growth and development and the evolutionary impulse itself.

Ugly Delicious (2018; Netflix) - Celebrity Chef David Chang's cooking travelogue series that explores the evolution of food, its co-evolution with culture and society and its relationship with different structures of consciousness. Special thanks to Jeff Salzman for finding this work...and check out his Daily Evolver podcast review of it - The Integral Practice of Pizza.

Childhood's End (2015; Syfy) - A flawed Syfy cable mini-series adaptation of Arthur C. Clarke's classic integral evolutionary science fiction novel that struggles to find its footing while still imparting the essential evolutionary trajectory of the original work. Even though it lacks the heart and spirit of the original story, one cannot help but feel the power of Clarke's universe and the tale of how the human race will ultimately transcend its limits (with a little help from some other worldly friends) and evolve into a Kosmo-centric species. There is also some of the wonderful archetypal power of the original's transcendent use of the demon/devil archetype.

Selma (2014; On Demand and Disk) - Selma is a multi-dimensional and multi-perspectival cinematic exploration of an event in the life of the Reverend Martin Luther King, Jr. that reveals the various individual and collective forces that moved all sides of this profound political moment in American history. During this exploration, Dr. King is revealed to be both a flawed human being on the personal relationship level and a masterful integral thinker with the capacity to see a greater depth and span in the events around him than those around him could see.

Andromeda (2000-2005; Syfy) - A brilliant, integrally-informed science fiction universe and series based on some unused material by Star Trek creator Gene Roddenberry. This wonderful little series has a progressively unfolding Kosmocentric center-of-gravity at the center of a hybrid mythic, rational and pluralistic storyworld that includes a wondrously simple yet complex exploration of the involution and evolution of consciousness, and an expanded perceptual field of sentient life and all its potential variations of beingness and becoming. Special thanks to Mark Le Sueur for bringing this work to our attention.

Star Trek Universe (1966-Present; Various) - Starting with the original Star Trek television series in 1966, through many itinerations up to the current Star Trek: Discovery streaming series, the Star Trek universe has given us a cinematic example of what an Integral moral universe would look like. With its evolutionary-aware Prime Directive and its trans-species post-Capitalist worldview, the Star Trek franchise has been planting integral consciousness seeds for over 50 years. While the episodes of the original series and the many spin-off series and the various theatrical itineration's vary in terms of just how integral they are in form and content, the center of gravity of the Star Trek universe is decidedly integral and evolutionary in heart and spirit, with the most recent works starting with the Star Trek (2009) theatrical reboot up to the current Star Trek: Discovery streaming series becoming much more integral across all expressive domains. Special thanks to Corey W. DeVos and Cindy Wigglesworth for their major contribution to an integral understanding of this profoundly influential cinematic franchise; be sure to check out their work on the Star Trek universe at IntegralLife.com.

Andrei Tarkovsky's Collected Works (1962-1986; Russia; On Demand and on Disk) - One of this year’s major research breakthroughs was the completion of our testing of the major cinematic works of Russian filmmaker and theorist Andrei Tarkovsky. What we discovered was that Tarkovsky's unique cinematic style, which he calls "sculpting in time," pervades all of his major works and is a masterful integrally-informed capturing of experiential reality. With long simple yet complex poetically choreographed shots that allow for a multi-layed unfolding of each successive cinematic moment, along with subtle shifts between narrative, visual, auditory, and temporal dimensions of individual and collective interior and exterior realities, Tarkovsky miraculously appears to be capturing and expressing a lived experiential reality in a profoundly visceral way. In addition, he seems to have a masterful capacity to capture and orchestrate gross, subtle and causal cinematic energies to create potential transcendental experiences and deep witnessing states in the viewer. With the addition of Tarkovsky's films into the integral cinema historical/evolutionary timeline we can see the deep impact his work has had on the evolution of integral cinema in particular and world cinema in general. The works included in this analysis are: Ivan's Childhood (1962); Andrei Rublev (1966); Solaris (1972); The Mirror (1975); Stalker (1979); Nostalghia (1983); and The Sacrifice (1986). Special thanks to Eugene Pustoshkin for bringing Tarkovsky to our attention and for sharing his deep knowledge of this integral cinema master and his work. For more on the Energetic Lens see Integral Cinema Studio (Kaplan, 2012)

La Jetée (1962; France; On Demand and Disk) - An avant-garde short using all still images to explore the nature of time, memory, dreams, human nature, the impermanence of the world of form and the evolution of self, culture and world, and in the end touches on the Kosmocentric witness at the edge of life and death.

Wild Strawberries (1957; Sweden; On Demand and Disk) - Ingmar Bergman's deeply reflective film explores the evolution of one man's life through memories, dreams, interactions and self-reflections. Through this process Bergman shows us how generational patterns imprison us and cause evolutionary regression, and how becoming a witness to these greater evolutionary and de-evolutionary patterns can awaken us and help us evolve further.

The Razor's Edge (1946; On Demand and Disk) - Adaptation of W. Somerset Maugham's classic tale of a young man in search of the meaning of existence and his evolutionary journey toward a higher and deeper level of being and becoming.

As you can see this has been a groundbreaking year for integral cinema with several works going beyond what has been done before in terms of integral cinematic expression and storytelling. In addition, the discovery of several important integral works from the past has given us a much clearer sense of the evolution of the embedding of the integral structure of consciousness in the moving image medium. In a strange way it seems that as our everyday reality is facing profound evolutionary challenges we are given a banner year of moving image works that help us expand and deepen our evolutionary awareness. Perhaps the collective evolutionary impulse is sending us a message...