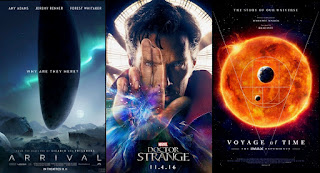 If you are interested in having an integrally-informed cinematic experience...check out one or all of these three movies currently in theaters:

A haunting and transcendent close-encounter movie that takes us on an elegant inner and outer cinematic journey that subtly attempts to integrate and transcend the boundaries of individual and collective interior and exterior existence, and the nature of language, perception and time itself.

A beautiful visceral IMAX cinematic experience into the evolutionary arc of existence and how holding it in our awareness can give us a deeper, richer and more integrated present-moment experience...the experience of the Kosmo-centric witness.

For more integrally-informed cinematic works check out The Integral Movie and TV List on the Internet Movie Database (IMDb) at: http://www.imdb.com/list/ls074613980/.

On the list you will find all the movies and television series that have tested positive for having integrally-informed elements to varying degrees according to testing criteria developed during research on the application of Integral Theory to cinematic media theory and practice.

For more on the Integral Cinema Project visit us at: www.integralcinema.com