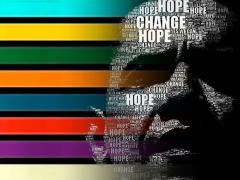 There has been an intense variety of responses to the announcement that the 2009 Nobel Peace Prize was awarded to President Barak Obama "for his extraordinary efforts to strengthen international diplomacy and cooperation between peoples."
Here is my Spiral Dynamics meditation on this spectrum of responses to President Obama wining the Nobel Peace Prize:
Posted by markallankaplan at 10/11/2009 01:04:00 PM