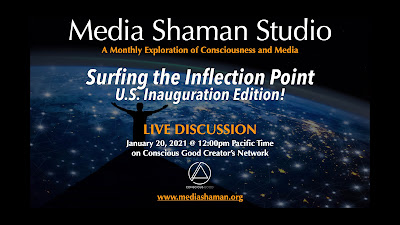 This January of 2021 finds us in the midst of a major inflection point as multiple polarized reality fields collide, which has brought us to a crisis point in this phase of the age of transformation. Between now and January 20, the date of the U.S. presidential inauguration, the liminal field within, between and around us will continue to expand and deepen, especially here in the United States but also reflected in many other countries around the world. Anything can happen in this moment of human history. The race between the old collapsing paradigms and systems of power and emerging new paradigms and systems has reached a critical point.
-------------------
For our Media Shaman Studio this month we will be holding a special session during the scheduled U.S. inauguration to help us individually and collectively work with this major inflection point in real time, using our Zoom meeting as a mini-mediasphere bubble inside the larger mediasphere, unpacking the events unfolding around us and the reactions to those events as they evolve.
Be sure to join us for our live discussion on Wednesday January 20th at 12pm PT.
-----------------------
Media Shaman Studio is a monthly in-depth public lecture and discussion series on the relationship between consciousness and media with host and facilitator, Mark Allan Kaplan, Ph.D and Jonathan Steigman. This series is offered for free and is open to all members of the Conscious Good Creators Network, the general public, and participants in our Media Shaman courses.
Posted by markallankaplan at 1/01/2021 09:11:00 PM