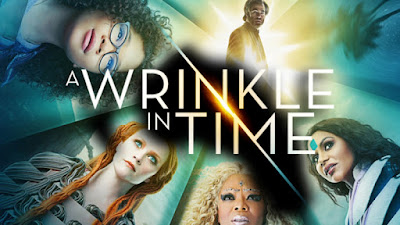 This month’s Conscious Movie-of-the-Month is Ava DuVernay's A Wrinkle in Time (2018).

Join us this month as we explore the feature film A Wrinkle in Time, a beautiful, rich and groundbreaking integrally-informed cinematic work that uses an advanced experimental form of storytelling that attempts to integrate and find a synergy between the masculine/agency and feminine/communion patterns of the Hero's and Heroine's Journey.

This is the second film by director Ava DuVernay that we have explored as one of our Movie-of-the-Month selections, the first one being her feature film Selma (2014). DuVernay is at the vanguard of the new conscious media movement in African American Cinema, and in many ways she is leading the way while also acting as a midwife for a whole new generation of deep feeling and thinking integrative African American conscious media makers.

With this multilayered cinematic work, DuVernay attempts to create this synergy between the masculine and feminine styles of communication through the integration of both agency- and communion-centered camerawork, production design and editing. This is combined with a weaving together of an overarching traditional masculine and action-oriented linear story structure with a more feminine and communion-oriented non-linear story telling approach with multi-layered story streams and spiraling evolutionary arcs of both its characters and its story and the structures of consciousness in and around them.

Regrettably this great and noble cinematic experiment falters at the end with a small yet fatal flaw in the story and character lines of development at a peak transition moment. Because of this and the advanced experimental nature of the work, many critics and audience members had trouble deeply connecting with the film. That said, this is still a great cinematic experiment worth seeing and studying.

As always, you are invited to watch A Wrinkle in Time on your own and then join us for our virtual discussion on March 21st at 1pm Pacific Time. If you have not seen the film you can stream it online on most of the main streaming services or get a free rental from your local library. We recommend watching the film at least twice, the second time with the intention of seeing any patterns of consciousness you had not seen before. As always, you are also invited to share your thoughts, reflections and musings about the movie in our group's online discussion forum.

Find out more about our free virtual discussion coming up on March 21st HERE.