Why I believe Marianne Williamson is the "real deal" 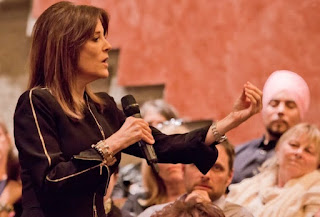 I believe these are serious times that require serious attention and action. I believe it is vital to help elevate the political discourse in the United States and around the world by getting alternative deeper and more expansive voices into the political and social spheres. We are seeing this happen more and more with the emergence of alternative voices speaking truth to power like those of politician Alexandria Ocasio-Cortez from the US, teenage climate warrior Greta Thunberg from Sweden and historian Rutger Bregman from the Netherlands.

There are also several deeper and more expansive voices attempting to speak truth to power among those running for the US presidency in the democratic political field, including Marianne Williamson and Andrew Yang. These two candidates are speaking on a different level than our normal political discourse is used to and I believe it is vital to get these voices out there, especially onto the stage at the democratic debates. To do that each candidate needs a certain number of contributors. I have donated $1 to each to do my part and I urge you to do the same.

Here I want to focus on Marianne Williamson and why I think her voice is vital and needs to be taken seriously, because I have a bit of inside information on the candidate and because much of the corporate media has been either directly or subtly discounting her as a "New Age Guru." I know Marianne. Not as a close personal friend but as someone who was in her congregation from the beginning; someone who has been inspired and helped by her on many occasions; and someone who has sat with her one-on-one in counseling sessions. She officiated at my wedding and sat with me and held my hand as I nervously waited for the bride-to-be who was running late. Back in the early days of the AIDS epidemic, I watched her minister to the gay community and sit with the sick and dying when most others were afraid to be near them.

I can personally attest to her being the "real deal"...she is a deep and expansive thinker rooted and grounded in a spiritual and moral center of being, who puts feet to her spirituality. I can attest that she does indeed walk-the-talk! And I believe her talk these days is important for us to hear for she is talking about some of the deep underlying issues that are not truly and clearly being addressed, like the need for us to heal the deep wounds that are haunting us, from the shadows of hatred, slavery, racism, misogyny, corruption, poverty and American imperialism, to the loss of our moral center in almost every sphere from economics to the environment...and most importantly, how she is framing how we deal with the rising threat to our democracy and what we are being called to do to save this grand American experiment. She does not just give us spiritual salve, she is trying to help us see the truth, to feel the pain and suffering spreading around us and recognize the clear and present danger to our freedom and our moral center as a nation...but she is doing so in a way that attempts to help us face these dire issues with a fierce love that does not feed the hate but seeks to heal and transform it...to heal the soul of America...

Mark thank you so very much for this post. I’ve known of her for decades, but it’s also been decades since I’ve given her a serious listen. I will donate as I know she is a wholehearted worker for great good. Talk about long term commitment!
I don’t want to miss Thursday nights talk. Where will details be posted? Is it an online webinar or a phone call? (So many questions!)