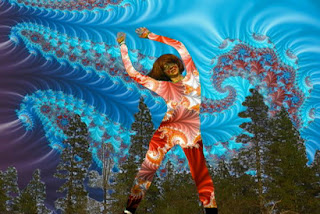 There are two uses of the term “transcinema.” One is used to refer to films about transgender issues and is usually spelled “trans-cinema;” the other usage, spelled “transcinema,” refers to creative works that use cinematic expression as part of a hybrid creative work, usually a combination of live performance and projected cinematic imagery.
The transcinema movement can be traced back to avant-garde art movements in the 60s and had a resurgence back in the late 90s and early part of the 2000s. This later expression appears to be connected to the introduction of digital media technologies and a greater cultural movement of convergence in media platforms. This movement can also be correlated to Integral and transpersonal cultural and creative trends in that it is boundary transcending (transpersonal) and represents a striving toward an integrated multi-dimensional mode of expression (Integral).
During my research into this area I discovered several patterns that appear to be unique to this form of hybrid cinema. It seems that once you start combining live performance and imagery and sound, audiences gets hooked on it and the absence of one or more of these elements must be used with extreme purpose and prejudice.
There is also a natural expectation of a “third and fourth story” beyond the story of the performance and the story on the screen; there is the story of their convergence (the convergence story) and the container for this convergence (the spatial story).
In addition, the audience tends to expect and anticipate a build in convergence between the live performance and the cinematic projections as the piece unfolds; they also tend to anticipate a convergence climax. Of course, the transcinema artist/team, have the choice to fulfill this pattern or consciously play against it, either subtly or overtly.
Posted by markallankaplan at 4/09/2011 09:33:00 PM