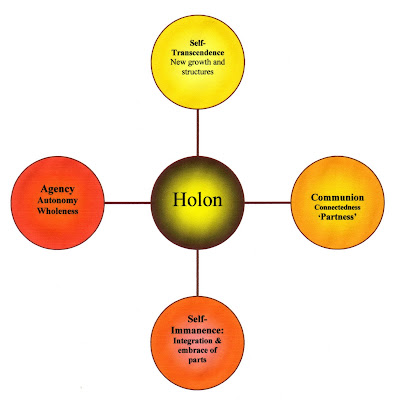 A holon (Greek: ὅλον, holon neuter form of ὅλος, holos "whole") is something that is simultaneously a whole and a part.

"A new perspective on whole-part relationships is taking shape around the concept of the holon - a term coined by Arthur Koestler to designate that which is simultaneously a whole in its own right and a part of a larger whole. An atom is a whole in itself. When it is also part of a molecule it becomes a holon, or a whole-part. The molecule that is also part of a cell is a holon, as is the cell that is part of an organ, and so on. This hierarchy of relationships from the atom to the organism is known as a holarchy. The concepts of holon and holarchy are fundamental to understanding the healthy function of complex living systems, which requires that each of their whole-parts maintain its own identity and boundaries even as it functions as part of the larger whole."
(The Post-Corporate World by David C. Korten)

Social holon
A social holon does not possess a dominant monad; it possesses only a definable "we-ness", as it is a collective made up of individual holons. [4] In addition, rather than possessing discrete agency, a social holon possesses what is defined as nexus agency. An illustration of nexus agency is best described by a flock of geese. Each goose is an individual holon, the flock makes up a social holon. Although the flock moves as one unit when flying, and it is "directed" by the choices of the lead goose, the flock itself is not mandated to follow that lead goose. Another way to consider this would be collective activity that has the potential for independent internal activity at any given moment.