The Medium is the Transpersonal 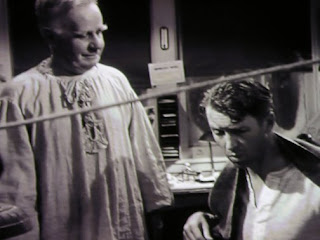 What is the connection between the Transpersonal and Cinema? Perhaps the very nature of any creative media is Transpersonal. Film and video, as well as all the arts . . . are ultimately the ideas, thoughts, and feelings of a "personal" mind (or minds) being extended outward to other minds. At this level we might say that the "medium is the message."

In the particular case of film, we have a medium steeped in alchemy, mythology, illusion, magic, and transcendence. When audiences first saw the image of a speeding train projected on a screen in front of them, they leaped from their seats and ran out of the theater screaming. A French magician made films in which people disappeared, became transparent, and flew to the moon. Like an ancient religious ritual we enter a darkened place in silence. As we sit before the giant alter, a great light slices the darkness and transforms the two-dimensional screen before us into a three-dimensional world.

Beyond the transpersonal nature of the medium itself, are some films more transpersonal than others? Surely films about angels (It's A Wonderful Life, 1946), life after death (Ghost, 1990), altered states (Altered States, 1980), dreams (Kurosawa's Dreams, 1990), archetypes (Star Wars, 1977), UFO phenomena (E.T.: The Extraterrestrial, 1982), mystical realities (The Last Wave, 1977) or religious experiences (The Last Temptation of Christ, 1988) are transpersonal in their content. And films that deal with shifts in temporal and spatial reality, like Field of Dreams (1989) and Groundhog Day (1993), weave the transpersonal into the dramatic structure itself. Then there are the films which embrace the transpersonal in the visual form as well as through the subject content and dramatic structure. In films like Wim Wenders' Wings of Desire (1987) and Lawrence Kasden's Grand Canyon (1991) the camera transcends all boundaries, moving through walls and floating through the air to capture the visceral reality of these other realms. Of course these categories tend to overlap and most transpersonal films are a combination of these elements.

I believe there is also a more subtle way that the transpersonal enters the cinema. There are films that move us in ways that are beyond just the stimulation of thoughts, ideas and emotions; beyond content, drama and form. These films cause a subtle shift inside us, they touch us on the level of soul or spirit. Sometimes these films deal directly with transpersonal realms; sometimes they are simple films about love and the human spirit; sometimes they are dark journeys into the underworld.

The power of these films seems to depend on the intersection of our own life's journey with the journey of the film. When this connection is made it seems as though this film was made for us. A chill moves through us and the notion of a grand design touches our awareness. In this way any film becomes transpersonal. From great works of filmic art to pop culture escapist adventures. Somehow the divine seems to be woven into the light of the movie projector. As the images and sounds dance before us, our realities and projections meet. Sometimes we are moved and entertained . . . and sometimes we are transformed.

(Originally published in Focus: The Quarterly Newsletter of the Institute of Transpersonal Psychology, Fall, 1-2, 1993)